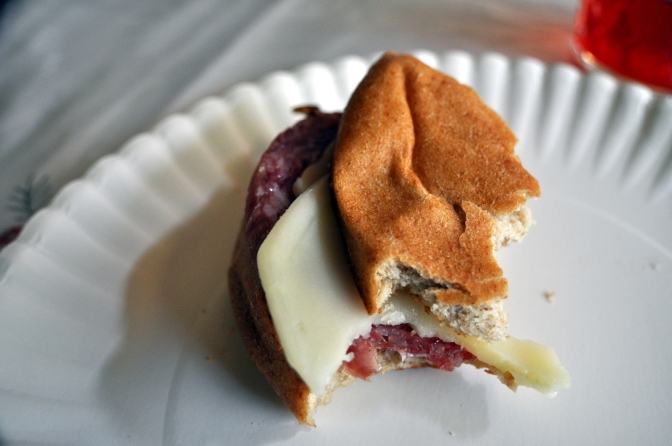 got eaten
by Sally, a very large mouse
with glasses
who absolutely loves
Salami and Swiss.
Her favorite is liverwurst
with tomato and onion
but mice have to eat what they can get
so today it is Salami and Swiss
on a toasted bagel with mayo
and sliced in half for her little mouse
size mouth which never shuts up anymore
according to her spouse
and like it’s TRUE—
Sally could go on and on and on
but she won’t
`cause she needs to finish her sandwich
and Miss Manners says it’s not polite to talk with a full mouse –which has Santa’s sandwich half eaten in her mouth. And Morris, the house cat is sleeping right now and she doesn’t want to wake him up `because he is such a grouch when someone wakes him …especially when he’s in the middle of a really good mouse dream. So Sally is chewing really QUIETly – shh!!
(WHISPERING NOW)
Miss Manners also says to finish the WHOLE sandwich or Sally is going to wind up on Santa’s naughty list… because it is not good to be wasteful, since people are hungry and would be ever so thankful for even one tiny morsel of that sandwich, so Sally better finish it all… and to chew it one hundred times or she is going to get one elephant sized stomach ache for eating Santa’s sandwich too fast…AND SALLY wants to wish you all a MERRY CHRISTMAS because mice don’t have to worry about being politically correct or any other human hang-ups—

DEAR sANTa,
I got Tired of Waiting and I’m real Sorry, but I ATE your Sandwich— I hope you don’t hold that against me. Because I was really looking forward to getting a fresh block of CHEESE for the winter and not for nothing, but you would be a lot healthier if you dropped a few lbs. OH – And I almost forgot, DON’T WAKE MORRIS!!
Signed,
Morris’s prey-mate,
Sally